A food technician is a job that most people would associate more with the 1970s and various lurid additives and e-numbers, rather than the 1920s and the “household arts”, but that is perhaps the best way to describe the work of Helen T.

For many years Helen lectured in the Department of Household Arts at Kings College For Women – now just Kings College, in London – and experimented with the science of particular ingredients and nutrition, with a view to improving advice given to school girls and therefore influencing the nation into better health. Since cooking and food had long been regarded as “women’s work”, this was an area where the growing number of female scientists were starting to make their mark at the time – although it is unlikely that Helen regarded herself as a scientist but more of an experimenter.

She was Scottish by birth, having been born into a landed family at the tail end of the 1890s. Her father – English by birth but Scottish by family – owned a large farm in the Scottish borders where he bred Leicester sheep and exhibited horses, and her mother appears to have done her fair share of work on the farm too. However, by the time Helen was two the flock of sheep had been sold, and the farm was let to a man from Edinburgh. Her father went to fight in the Boer War, leaving Helen and her mother living on the farm. Her mother called herself the head dairymaid, indicating that she was in charge of this operation, but clearly did not own the property herself. There were also two servants living with Helen and her mother, but possibly not working for them and rather perhaps for the farmer himself.

Helen and her mother then disappear from the British records for quite some considerable time. The best guess is that after the Boer War her father settled abroad somewhere and they went to join him, as later records do not appear to indicate a parental split. This may well have been in southern Africa, as there were many farming opportunities and perceived fortunes to be made across the former British colonies, but there is no indication of exactly where.

It is known that Helen travelled though, as there is a shipping record of her coming back to the UK from Gibraltar when she was in her mid-20s, and she must have studied in Paris at some point as she gained a diploma in cookery from the Cordon Bleu school based there. Her mother took up residence in Glasgow, it appears, when back in this country, and her father’s brother was quite prominent in life in County Durham, but Helen based herself in London.

She became a lecturer in the Household and Social Science Department at Kings College for Women in 1924. At this point the school was attached to that institution, but it became an independent entity in 1928 called King’s College of Household and Social Science. This meant that in 1929 the school was part of the University of London in the Faculty of Science. They also offered short courses in Institutional and Household Management, and a science course for nurses to enable them to gain a position of Sister Tutor.

The staff of King’s College in 1938. Helen is almost certainly included, somewhere.

Girls had been taught household skills at schools for many years – they were seen as an important part of the elementary school curriculum, undertaken by older pupils, either to prepare the young woman for running her own household when she married or for a skills base to enable them to take a placement as a domestic servant. Girls learnt cookery, how to stretch a household budget, sewing and textile crafts, laundry management and skills, and how to clean various different items. The advent of technology has meant that today these skills can be accomplished quickly and easily, but back then these jobs were often manual labour – cleaning silver cutlery, washing with a copper and a mangle, cooking on a range, and so on.

The Kings College of Household and Social Science took these tasks further, pushing the boundaries to find new ways of providing good nutrition, efficiencies in laundry tasks, science of food preservation, and many other ground-breaking ideas. Helen was involved in this end of the academic research, teaching the students and helping them to develop their own ideas.

Food was undoubtedly her speciality, both as an academic exploring nutrition and a cook working in the teaching kitchen. She also broadcast on her subjects as part of her job. A 1927 festive programme on BBC radio records that she was offering advice on how to “provide a party of children with a spread that will satisfy their keen sense of what is due at Christmas-time, without making them ill.” The accompanying blurb says that at this time she was an examiner in sick room cookery at Middlesex Hospital – nutritionists played an important part in helping the sick get well – and that she was presently engaged in working at the Low Temperature Research Station at Cambridge. Cooking at lower temperatures would have meant using less fuel, which would have helped household budgets – therefore Helen’s research would have directly impacted on women’s daily lives.

Cookery students at Kings in the 1930s

She worked closely with Miss Jessie Lindsay, who was head of the Household Arts department, and later became the only woman member of the Advisory Committee on Nutrition for the Ministry of Health. Jessie was also an examiner in sick room cookery, and an expert in dietetics. Together they collaborated on two books. The first, What Every Cook Should Know, appeared in 1932. Rather than being a recipe book, it instead looks at the underlying basic principles of preparing food – handling yeast, how different parts of an animal have different cell structures so behave in disparate ways when heat is applied, commonly observed faults in recipes, and so on. In this sense, the work is far more about the science rather than the art of cookery, and thus goes way beyond the usually assumed remit of housewifery and domestic arts.

Their second book, Modern Cookery for Schools, was published in 1934, and instructed teachers on how best to instruct their students in meal preparation and planning. This was considered a definitive work in the teaching of domestic science, and was a popular tome for many years after publication. 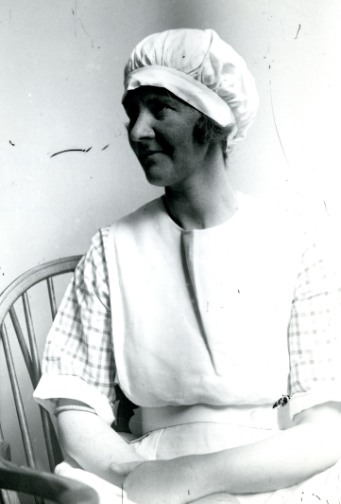 As for her personal life, Helen never married. She lived with a woman, Margaret, at addresses both in London and a village on the borders of Oxfordshire and Buckinghamshire. Margaret worked as an arts auctioneer. There is no indication whether that this was a romantic relationship, and if it was it would have flown mostly under the radar, but it is equally possible that this was a close friendship. There was a marriage bar on female teachers in schools until 1944, and although it depended on the institution whether this applied to female lecturers it often meant that these guidelines were socially followed, and Margaret may have been a close companion rather than a lover. Her mother spent some time in Glasgow, and some time with her sister in Kent, meaning that she was close if Helen needed her. There was also a third member of their village household, an arts master named William, who may have had some connection to either Margaret’s work, or taught at a London university himself alongside Helen.

At the outbreak of the Second World War, Helen was still working at Kings College, but referred to herself as a journalist as well as a lecturer, so may well have been contributing to various publications. Kings College and its students was evacuated from London, first going to Cardiff – where Jessie Lindsay can be found on the 1939 register – and then subsequently to Leicester.

Helen did not go with the college, however. She resigned her position to take a role in the newly re-established Ministry of Food, under its first director W S Morrison and then under the more famous Lord Woolton. Using her expertise on nutrition and household economics, she organised a nationwide propaganda campaign on food advice aimed at housewives, and gained a promotion to Head of the Food Advice Division. Much of this advice probably found itself into war-time food leaflets, although these did not bear Helen’s name.

In this new role, amid the introduction of rationing in January 1940, Helen flourished, from all accounts.

“It was her personal qualities which gave to her work so great a measure of inspiration,” recalled former colleague Howard Marshall. “She saw in the Food Advice movement an opportunity for service to the community. She realised that the guidance she was able to give to housewives through her Food Advice centres would result in better standards of living.”

Her mother died in Kent, in the first year of the war, leaving her effects to Helen. Her father appears to have been dead for quite a while before this, but there is no British record for what happened to him.

However, this job – though it appeared to be a great fit for Helen’s skills and personality – did not last long enough. She died suddenly at her village home in 1942, aged only 44, shocking the staff of the Ministry of Food.

“She was passionately sincere and entirely selfless in her approach to the problems created by war-time conditions,” said Howard Marshall, in letters. “Her humour, her enthusiasm, her wide humanity, and her energy will be sadly missed by all those who were privileged to work with her…. She was, I believe, too modest ever to have known how important her contribution was or how much it was appreciated… I feel as if a light had gone out… The best tribute we can pay to her memory is to continue the service to the community which is represented by Food Advice with our utmost energy.”

Her funeral was quietly held in the village, and her effects were handled by Margaret and a Scottish Writer to the Signet. There was a considerable amount of money that she had accumulated during her life.

Her former colleague Jessie Lindsay resigned her post from Kings College in 1948, though her books continued to be published for many years. She lived to be 100. Margaret lived on in their house until the mid-1970s, dying in her 80s.

The Women Who Made Me

The Women Who Made Me project is an off-shoot of www.onceuponafamilytree.co.uk and seeks to bring the lives of real women from the past into focus, against a family history background traditionally populated by their male contemporaries. To include the life of a woman in The Women Who Made Me, there has to be a story to tell beyond the bare details that she was born, she married, she died. The barest oral details of her life, or facts identified from records, can flesh out her story and bring her life into focus. Exact identifying details are blurred (no surnames, exact addresses, exact years of birth or death) to protect the data of living family.